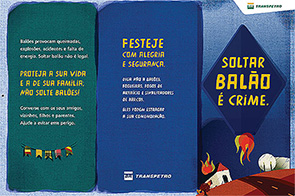 EDuring the June Festivals, especially now, since it coincides with the FIFA World Cup in Brazil, redoubled caution is needed with some practices that endanger the celebrations, such as releasing paper hot air balloons, fireworks, flares, and building giant bonfires.

Transpetro’s goal is to alert, and make a broad awareness campaign directed to, its workforce and communities surrounding the operation units across the country. Posters and leaflets are calling attention to the problem, especially for the high risk of launching big paper hot air balloons, which endanger people and the environment, and represent a serious threat to operational facilities of the oil and gas industry, and its workers. It's a practice prohibited in Brazil, which can lead to arrest.

At Carnaval, don't look the other way. Report it! 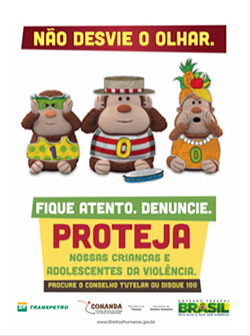 The Secretariat of Human Rights of the Presidency of the Republic – SDH/PR launches every year the National Campaign of Carnival for the End of Sexual Violence Against Children and Adolescents, as a way of raising awareness in society about the incidence of this practice across the country.

This year, faced with the need of a broader communication strategy for the protection and defense of the rights of children and adolescents, the mobilization for the Carnaval is aligned with the National Campaign for the Rights of Children and Adolescents. Transpetro, as signed on its Corporate Commitment to fight against sexual violence against children and adolescents, launched, during the Carnaval period, a campaign with its workers, disseminating information via videos and posters, raising awareness about the importance of combating Sexual Exploitation of Children and Adolescents. 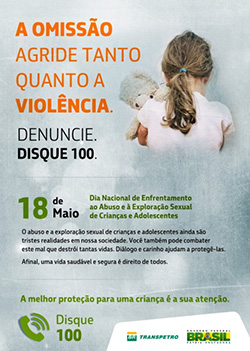 May 18 has been established, via Law no. 9970/00, as the National Day to Fight Against the Sexual Abuse and Sexual Exploitation of Children and Adolescents. Transpetro held, during the period from 13 to 17 May, activities throughout the country in order to educate its workforce and the society about the importance of protecting children's rights, and to publicize the Dial 100 (the Human Rights Hotline).

Among our actions, we publicized Dial 100 on the Company's internal web portals, and in Transpetro's terminals.