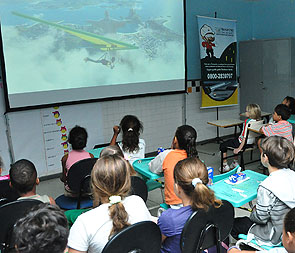 In 2013, there were 154 sessions and were exhibited three feature-length movies, which covered all age groups. Besides being a far-reaching social and cultural activity, the Petrobras Movies in Motion project aims to use the cinema as a teaching tool, stimulating learning when addressing topics of general interest, such as recycling, environment, and citizenship, among others.